Retention of a mandibular denture can be achieved by an implant-retained or natural tooth-retained bar and stud attachment in the anterior segment of the mandible. The same design principles holds true for both implant-retained and tooth-retained methods of anchoring the bar and stud attachment. A simple and cost effective treatment for more complex implant overdenture is the concept of conventional tooth-retained overdentures. When few firm teeth still remain in a compromised dentition, preservation of these teeth for overdentures can improve retention and stability. The authors present a clinical report of a patient treated with a mandibular tooth-borne overdenture with bar and O-ring attachment. A splinted bar supported the prosthesis and an O-ring retained the denture.

Retaining teeth for an overdenture is an old concept and a viable treatment modality. Overdentures provide better function than conventional complete dentures through a variety of factors, such as improved biting force chewing efficiency, and increased speed of controlled mandibular movement. In addition, they minimize the downward and forward setting of a denture, which otherwise occurs with alveolar bone resorption.The key to success of an overdenture is the selection of strategic roots or teeth for retention. Elective endodontics and periodontal therapy make them excellent abutments for an overdenture. Abutment teeth are prepared, to create adequate space for the overlying denture. The shortened crown improves the crown-to-root ratio, thereby decreasing the motility of the abutment teeth under an overdenture. In a 4-year-study, Renner et al showed that 50% of roots, used as overdenture abutments remained immobile. In addition, 25% of roots that were initially mobile became less mobile. Hence, they suggested, that teeth that are generally compromised can be used for overdentures after root canal therapy and decoronation.

The use of attachments can redirect occlusal forces away from weak supporting abutments and onto soft tissue, or redirect occlusal forces toward stronger abutments and away from soft tissues. They act as shock absorbers and stress redirectors as well as providing superior retention. Attachments are often used in overdenture construction by either connecting the attachments to cast abutment copings or connecting into the prepared post space of the abutment teeth. Overdenture attachments are classified either as studs, which connect the prosthesis to the individual tooth, or as bars which connect the prosthesis to the splinted abutment teeth. They are further classified as rigid or resilient. However, since edentulous ridges and the remaining roots are often compromised, the prosthesis that relies on resilient attachments is better able to divert occlusal forces away from weak abutment teeth. The metal O-ring attachment system is considered to be a good resilient attachment for overdentures.

Bar attachments are commonly used for overdentures. They provide a splinting mechanism between the overdenture abutment teeth and increase the stability and retention of the prosthesis.A common bar attachment assembly for overdenture is the one-piece cast bar, connecting to the copings that are luted to abutment teeth. The design of combined bar and O-ring retained denture is most common for an implant supported overdenture. There are no reports in the literature with regard to the use of this design in tooth-borne overdentures. This clinical report describes the use of bar and O-ring stud attachments to retain tooth-borne mandibular dentures. The O-ring stud attachment used in the report was replicated from an implant prosthetic component.

Topway Dental lab is a professional outsourcing dental lab since 2006. Topway dental lab registered with US FDA and implement a quality management system that is certified under ISO 9001:2015 and ISO 13485:2012. You can be assured that all of your cases are made by FDA registered and CE certificated safe materials. With years of outsourcing experience to dental labs and clinics all around the world. We believe that not only the life-like aesthetics nature appearance but also the perfect fit, contact and excellent occlusion plus always on time delivery makes us one of the most competitive dental lab in China. Now we are dedicated to provide you the most reliable quality dental restorations and orthodontic devices. 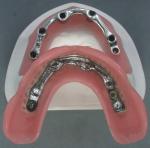 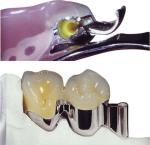