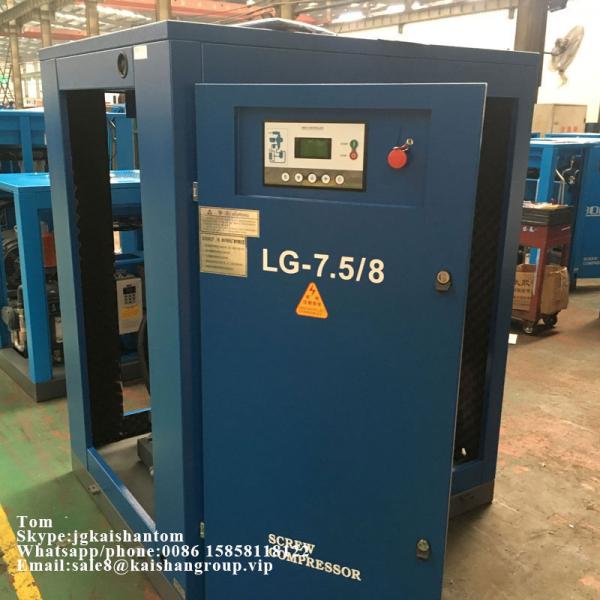 The Design Features of the LG Series

1.Our single-stage rotary screw airend is engineered for its durability. Larger rotors allows for bigger bearings, 30%-50% slower rotor speeds results in less power consumption, lower sound levels and reduced maintenance cost .
2.Our one piece bearing housing ensures both rotors are ridgely held by the bearings in proper alignment during transient periods such as machine startups/shutdowns or load changes.
3.SKF bearings and SEALTECH bearing seals are utilized in all airends.
4.All of our compressors have the latest inlet valve, airend air discharge port and oil inlet port design.
5.Lower sound (dBA) emission level than most of our competitors results in less sound pollution.
6.The axial and rotational loadings are supported by different bearings for better stiffness and less transition noise.
7.Simple package design requires only minimum maintenance for optimum performance.
8.Continuous cooling and circulation of lubricating oil, ensures long airend operating life.

100% taken from our factory, we are reliable, worth your trust

See what inside our machine

We have different models for various of need.

Engineers avaliable to offer overseas after-service within 48 hours after recive your requirement.Big fatory provide 100% guarantee of after service.We are reliable and worth your trust.

Wooden Packing is available accoding to your need.

Some FAQ for you reference

Q1: Are you factory or trade company?
A1: We are factory. And we have ourselves trading company.
Q2: What the exactly address of your factory?
A2: Our company is located in JNo.9 Kaixuan Ave West,Economic Zone Quzhou, Zhejiang, China
Q3: Warranty terms of your machine?
A3: One year warranty for the machine and technical support according to your needs.
Q4: Will you provide some spare parts of the machines?
A4: Yes, of course.
Q5: What about the voltage of products? Can they be customized?
A5: Yes, of course. The voltage can be customized according to your equirement.
Q6: Which payment term can you accept?
A6: 30% T/T in advanced, 70% T/T against the B/L copy.
Q7: How long will you take to arrange production?
A7: 380V 50HZ we can delivery the goods within 7-15 days. Other electricity or other color we will delivery within 25-30 days.
Q8: Can you accept OEM orders?
A8: Yes, with professional design team, OEM orders are highly welcome.
Q9: Which trade term can you accept?
A9: Available trade terms: FOB, CIF, CFR, EXW, CPT, etc.

Currently, Kaishan group has 18 subordinate companies with over 4100 employees. It covers an area of over430,000 m2 with the total building complex area over 230,000 m2 and the total assets of the group amounts to over 1.5 billion.

“Kaishan” trademark, together with its logo, is the first company awarded with “Chinese renowned trademark” in the same trade and Kaishan air compressor is among the first exempted by Chinese government.

By the year of 2008, the total sales revenue of the group is 2.03 billion RMB, with 173 million RMB of profit, and USD10.69 million worth of export goods. Kaishan group has been honored with “Special Quzhou Mayoral Award” for the past consecutive eight years.

By far, Kaishan group is the largest rock drill manufacturer in the world, and the largest air compressor manufacturer in China. Exports are shipped to over 20 different nations and regions such as United States, Germany,Japan, South Korea, Russia, African and Latin American countries.

In recent years, Kaishan group sticks to the talent-employment standard of Capable, Tough and Reliable and upholds the enterprise spirit of Flexible, Efficient, and Confident. Focusing on technology and industry innovation and centering product and market restructuring, the group have already planned a “4211” development strategy.

In 2005, cooperating with Xi’an Jiaotong University compressor research institute and interlinking with the state 863 project, the group successfully developed a high-tech product: screw air compressor’s core part : screw rotors . It marks the end of relying on import this unit from overseas only in China. The success has made Kaishan group the first in the industry which owns the intellectual property, core technique and competitive advantage among large-scale equipment manufacturers in China. In 2006, Kaishan group was awarded with a second-class outstanding technique invention award by Chinese government for this technology.

Upon the success, we are currently trying to list one of our subordinate company: Zhejiang Kaishan General Machinery Co., Ltd to the share market. Also, we are hoping to develop Kaishan group into a large-scale and diversified manufacturer with its own patent core technique and core competitiveness. We are striving to rejuvenate our national industry and develop as the pillar of Chinese air compressor industry in a yearning for greater contribution to China’s harmonious society construction and national equipment manufacturing industry development. 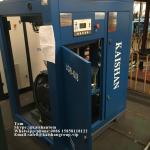 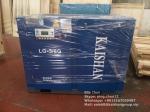 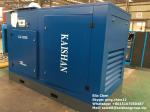